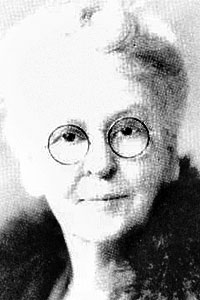 Janet Wood (nee Jaffray) was born in Bannockburn, Scotland and spent her early childhood in Ontario. She moved with the family to Kildonan, Manitoba and later to farm life at Elkhorn where she met and married J.S. Wood in 1887. Sixteen years later, they moved to Oakville to make their home.

Wood was one of the founders of farm women’s organizations in this province. She was instrumental in organizing the first local of the women’s section of Manitoba Grain Growers’ Association in 1915. In 1918, she was elected first president of the provincial organization. While under her office, the organization changed its name to United Farm Women of Manitoba. Wood was largely responsible for the erection of M.F.A.C. Library Hall. In 1931, her work was recognized by the University of Manitoba when she was granted an Honorary Diploma for “assistance to agriculture and to the social life of the community.” Her portrait was hung in the Rotunda of the University of Manitoba as one of the builders of the province. Under it were inscribed these words:”For her work among rural communities in Manitoba and for her work as president of the United Farm Women of Manitoba.”

No more fitting tribute could be paid to Wood than to quote her own words used in her final presidential address to the annual convention of the Manitoba Grain Growers’ Association in Brandon in 1922, when she appealed to the women to march on “with steadfast purpose and never failing endeavour, believing that it is not the length of our lives, but the breadth that counts.”