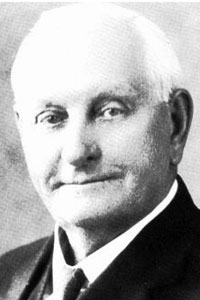 Almon James Cotton was born in 1858 near Port Hope, Ontario. In 1880, he married Esther Louise Ford and thus was established a life-long partnership. Her constant support and encouragement was a strong, binding element for their union. Life for this couple began on a small inherited acreage. However, the West was quite enticing, so in 1888, he sold the farm and moved his young family to Treherne, Manitoba. For 10 years, Cotton very successfully grew excellent crops on rented land. He was able to improve the yield of his wheat crops to such a degree that he became known as the “Wheat King” of Manitoba.

His thoughts turned to the promise of the newly opened up area of the Swan River Valley. In 1898, traveling by covered wagon, he journeyed to the valley and purchased two sections. In later years, he added three more sections to his holdings. Cotton returned to Treherne and in October 1901, the Cotton family, which included their five children, moved to the valley.

Cotton worked to improve conditions for the new settlers. Many of the early improvements in the valley came as a result of his lobbying the authorities of the day. Concerns such as roads and bridges soon gave way to schools, churches and cemeteries. He was instrumental in organizing the Harlington School District and served on the board for many years. Cotton helped to start the Riverside Cemetery. His contribution of land for the Methodist (later United) Church in Kenville and his service as a lay reader and as Sunday School superintendent were a strong indication of his depth of concern for the community. He served on the Board of Governors of the University of Manitoba from 1917 to 1934, illustrating his desire to be of lasting help to others.

He was an unpaid ambassador for the Department of Immigration. He wrote more than 2,000 letters to people in all parts of the world encouraging them to come and settle in the valley. He was very proud of the area and used every opportunity to expand on its attributes and to show it off to visitors. Not only did he show them particularly scenic spots, but in later years he also snapped thousands of pictures to be enjoyed by all.

Perhaps his greatest legacy was the numerous records and letter-books, duplicates of all the letters that he had written. In 1985, the Manitoba Records Society used this material to publish the book, The Wheat King. Cotton was a man of vision, determination and concern for his fellowman. He has left his mark on the early history of the West and Swan River Valley.