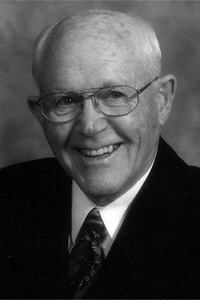 T. Roy Bailey was born on their now Centennial Farm near Carberry on September 5, 1915. He was married to Nora Froom for 45 years. They had three sons, Alan, Brian and Douglas. He was married to Edith Ranson for 14 years before she, too, predeceased him.

Roy operated a successful cattle operation before switching to potato growing. He was one of several who were instrumental in the events that led to J.R. Simplot building the potato processing plant at Carberry in 1962. At that time he started to contract potatoes for this plant. Today his son, Alan, along with grandson, Terry, continue this practice. T. Roy was involved in the Save the Soil program. He also served as chairman of the early vegetable growers group, which preceded the Keystone Vegetable Producers Association.

For many years T. Roy chaired the Board of Stewards of Carberry United Church, served on the session and sang in the choir. He served the Rural Municipality of North Cypress for fourteen years, seven as Reeve, chaired the Carberry hospital board, served as secretary-treasurer of Prosser School and held Grand Lodge positions in the Independent Order of Odd Fellows. He also helped fund the Carberry District Recreational Complex. T. Roy funds an annual $2,000 Memorial Scholarship for a Carberry Collegiate student entering a career in agriculture, theology, education, music or science.

For eight years, T. Roy served as area representative of Canadian Co-operative Implements. He promoted the growing of sunflowers in his area and served on the Board of Co-operative Vegetable Oils Ltd. in Altona for 12 years. He toured Russian sunflower production facilities and acted as a ‘pilot grower’ for the University of Manitoba in the development of such special crops as coriander, crambe and safflower. The Bailey family regularly hosted Diploma Agriculture students from the University of Manitoba as well as farm tours from Germany.

In 1967, T. Roy was chosen by the Red River Exhibition Association as Mr. Manitoba Farmer. In 1970, the Baileys hosted the Royal Family at their farm during Manitoba’s Centennial. In 2005, he received the Lifetime Achievement Award from the Carberry Chamber of Commerce and that same year he officially opened the annual Carberry Fair.

Thomas Roy Bailey is known as a caring and generous man who exhibited great leadership in the Carberry district. He gave freely of his time and energy to assist in the development of numerous community projects.