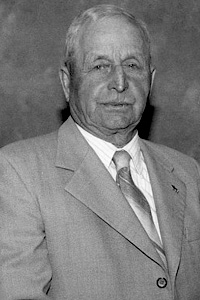 Alfred Edwin (Eddy) Arnold was born in Toronto in 1898 and received his education in Shoal Lake, Manitoba.

Mr. Arnold began his career in the heavy horse business in 1918, introducing the “Croydon” line in 1923 and has continued to use this name for his line of fine Clydesdale horses. He was to show his Clydesdales to the Toronto Royal Winter Fair for forty years.

Always striving to breed superior animals with endurance, Mr. Arnold won prizes with his horses wherever he went. He has been a much sought after heavy horse judge for many years, and has no doubt influenced the breeding and selection of others in the horse business during the past 60 years.

Mr. Arnold not only raised and judged heavy horses, but young people traveling with him were trained in proper horse care showing techniques.

As a member of the Agriculture Council and Stock Improvement Club, he assisted young people in learning about calf care feeding and management, encouraging them to become involved.

Mr. Arnold holds membership in the Manitoba and Canadian Clydesdale Clubs, Manitoba Horse Breeders, Heavy Horse Selection Committee for the Royal Winter Fair in Toronto and the Shoal Lake Agricultural Society and others. He has received numerous awards and life memberships for his contributions.

In 1983, Mr. Arnold attended the Royal Highland Show in Scotland, bringing back yet another promising foal.

Alfred Edwin Arnold has been characterized by “his thoroughness in all things” and “his willingness to advise and encourage his fellow horsemen”. He not only brought honour to himself and his hometown, but also to the province and Western Canada.