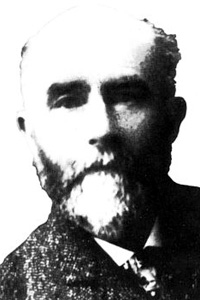 John Barron was born and educated at Elora, Ontario. He moved to Manitoba in 1878 and homesteaded near Carberry, having been one of the first settlers in this area.

In 1882, Mr. Barron established one of the best Shorthorn herds in Canada. His farm was known as the “Fairview Stock Farm” and the quality of his breeding stock was the finest. The men that came after Mr. Barron had the advantage of obtaining excellent foundation stock from his herd in exhibitions all over Canada. Mr. Barron’s name topped the prize list. In 1897 he swept the field at the Industrial Exhibition in Winnipeg.

Mr. Barron took an active interest in the welfare of the Carberry community. He served the Municipality of North Cypress as Reeve and Councillor for a number of years, was a member of the Carberry Masonic Lodge #29 for 42 years and was a director of the Carberry Agricultural Society. Mr. Barron not only raised good stock himself but advised and assisted neighbours in the improvement of their own herds.

Mr. Barron developed a model, up-to-date and thoroughly equipped farm. By his methods and his success he established a standard of attainment which has influenced agricultural development.