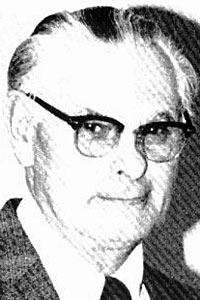 Alfred John Strachan was born in Pope, Manitoba on December 11, 1915, the son of John and Margaret (nee Stuart) Strachan. In 1925, the family moved to Carman where Alfred received his education. He graduated from the University of Manitoba in 1938 with his Bachelor of Science in Agriculture.

Strachan joined the Dominion Department of Agriculture and worked in conjunction with the PFRA. His work took him to the Brandon Experimental Farm, Melita and Minnedosa.

He married Nina Crampton in 1939 and along with their two daughters and one son returned in 1943 to the farm and the Strachan Seed Company, which sold registered seed grains, packaged garden seeds and potato eyes across Canada.

Strachan was a registered sheep and swine breeder, exhibiting and judging throughout Western Canada. He won both the Champion Herd of Swine and Champion Flock of Sheep at the Toronto Royal. He served as president of the Manitoba Swine Breeders’ Association as well as the Canadian Sheep Breeders’ Association.

He served his community as a 4-H leader, member of the Dufferin Agricultural Society and director of the Arena Board. Sports were also a part of his life as he played for the Bison basketball team, served as president of the University Athletic Association, won an award from the Canadian Amateur Hockey Association for work with minor hockey and was president of the Carman/Dufferin Recreation Commission.

Strachan’s greatest contribution to agriculture was in the field of horticulture. He carried on an extensive breeding program with gladioli. He developed six new varieties and exhibited across Canada, into the United States and London, England. At the golden Jubilee Gladioli Show, Strachan won four firsts and two seconds with his eight entries, winning the Reserve Champion spike of show. The trophies were presented by the Duchess of Gloucester.

Strachan enjoyed sharing his knowledge with others, giving freely of his time and energies to all who wished to learn.