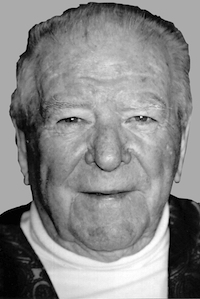 Welland (Stoney) Stonehouse, the second youngest in a family of ten, was born on March 11, 1922, at McAuley, Manitoba. When he was four, Welland’s family moved to Two Creeks, Manitoba, where he attended school until the age of 17. His interests in a Boys and Girls Poultry Club led to his being hired as manager of the poultry barn at the University of Manitoba. While working, he attended night school, eventually entering the Faculty of Agriculture from which he graduated with a BSA in 1952. Welland began his professional career as an Agricultural Representative at Shoal Lake, Manitoba. His extension programs were many and varied, but his most significant involvement was with 4-H and coaching judging teams for competition at the Toronto Royal Winter Fair.

In 1956,Welland transferred to Carberry where he continued to coach and mentor 4-H members. He worked to develop the agricultural and leadership skills of youth, giving them the confidence to assume major roles in their communities and beyond. Welland formed a Junior Farmers’ Organization which focused on improving seed cleaning facilities and irrigation systems, and establishing test plots for potatoes, onions, carrots and turnips. To support the growing potato industry,Welland worked to create a development corporation which was used to purchase the RCAF base at Carberry. The facility was later sold to J.R. Simplot which established a major potato processing facility. Welland was instrumental in forming the “Manitoba Potato King” award to recognize top producers.

Welland worked briefly for Simplot and then Standard Chemical where he introduced a program to inhibit sprouting in potatoes. From 1969 to 1989, he worked for Chipman Chemicals, now Syngenta, where he was instrumental in developing the use of foliar fungicides for the control of powdery mildew in irrigated wheat, desiccants on potatoes and pulse crops, a potato seed piece treatment to aid suberization, and a new grass herbicide for broadleaf crops. Syngenta now uses concepts developed by Welland in 27 countries. He was ahead of his time in introducing chemical fallow, reduced tillage and direct seeding on the prairies.

Welland’s co-workers described him as a man of honesty and integrity, as someone passionate about agriculture and producers, a mentor to beginning agronomists, a good listener and a great communicator with a wealth of knowledge to share.

Welland Stonehouse’s foresight, energy, encouragement, and ability to elicit support from others contributed to his career success. He left an enduring imprint on many individuals, communities and businesses.