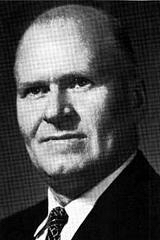 Eric Stefanson was born in Winnipeg and received his public schooling in Vestfold, Manitoba. He attended high school at the Daniel McIntyre Collegiate in Winnipeg.

From 1935 to 1948, Stefanson operated a dairy farm at Oak Point and then moved to Gimli where he owned a general store. Later he operated an insurance business. He served as a municipal councillor for the town of Gimli for eight years and four years as deputy mayor. He served as a director of the Manitoba Chamber of Commerce for two years and as president of the Icelandic Celebration Committee for four years.

He was extremely active in community affairs, having been Past Master of Lisgar Masonic Lodge, a charter member of the Viking Masonic Lodge and an honorary member of several organizations, including the Selkirk Kiwanis Club.

Due to his local civic experience, Stefanson was elected to the House of Commons. Stefanson served as a member of Parliament for 10 years. He served on a number of House of Commons committees: Agriculture and ARDA, National Defence, Special Committee on Humans Rights and Fundamental Freedoms.

In 1970, Stefanson became general manager of the Interlake Development Corporation at Arborg and worked most enthusiastically for the corporation in the Interlake region. Agriculture was Stefanson’s foremost concern; he often said, “We cannot survive without our farmers,” and in that respect, he worked diligently on their behalf.