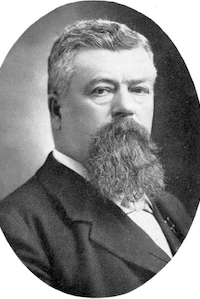 Thomas Greenway was born in Cornwall, England and came to Canada with his parents in 1844. He received his education in public schools of the Township of Steven, County Huron, Ontario, where his father had taken up land. He was later a general merchant at Centralia. Greenway was elected reeve of the township in 1867 and served in that capacity for 10 years. He came to Manitoba and the Crystal City area in 1878, where he purchased a farm of 800 acres.

In Manitoba’s early history, Greenway’s outstanding work was along immigration lines. His leadership brought many others to settle in the area and his farm soon became an example of mixed farming on the Prairies. His farm was known as the Prairie Home Stock Farm.

In 1887, Greenway became premier of Manitoba. While premier, he was also the minister of agriculture, therefore he was well able to anticipate the need of the farmers and to develop programs for their benefit.

To Greenway belongs the honor of inaugurating farmers institutes in the West; of encouraging the breeding of purebred stock by grants to agricultural societies and to creameries and cheese factories; the lowering of grain freight rates; the encouragement of the establishing of farmers’ elevators; the first noxious weeds act; the enlarging of the scope and privileges of the dairy association; and a score of other things bearing directly on the life of the farm.