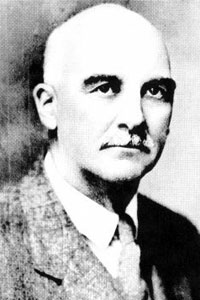 Francis John Collyer was born February 18, 1865 at Rye, Sussex, England. He came to Canada in 1882 and was one of the first farmers in the Welwyn district, where he homesteaded. He, his wife, Jane Traquair and their son and daughter lived on Houghton Farm for the better part of their lives.

Collyer was the first secretary-treasurer of the Welwyn Farmer’s Elevator Company. He was the main organizer of the company and through his efforts, the company obtained a building site. In 1913, he was elected director of the Grain Growers Grain Company and after 1916, as a director of the United Grain Growers, serving in this capacity until 1944. He was a leader and a member of the Canadian Council of Agriculture for many years.

Besides being a successful grain farmer, Collyer took a keen interest in the breeding and marketing of livestock, specializing in Aberdeen Angus. He was instrumental in the establishment of the Canadian Aberdeen Association and Canadian Livestock Records.

In 1905, he represented the West in setting up the Canadian National Livestock Records Board.

Collyer served on committees from the Archie Municipality requesting the Roblin government to extend the railway from Virden to Kirkella to Rocanville and Esterhazy.

He was appointed justice of the peace in 1894. In 1916, he became the first chairman of the board on the first consolidated school in Manitoba at McAuley.

As a farmer, Collyer was interested in improving the lot of the western farmer. He was a student of early Canadian history, a collector of historical records for this period and one who sought to preserve the historical sites in the area.