Nominated by: Family, Neighbours and Colleagues 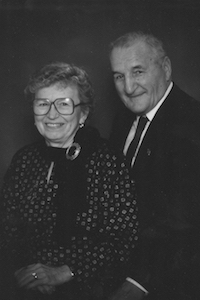 Anthony R. (Anton) Chorney was born in the R.M. of Brokenhead and spent his early years in Walkleyburg. He attended Lilydale School in the R.M. of St. Clements where he and wife Adeline later established their farm. Adeline (nee Zaborniak) was born and raised in Highland Glen, a region settled in the mid 1890s by Eastern European immigrants.

Anton grew up on a diversified livestock and grain operation which eventually grew to some 2300 acres and required 40 horses and one tractor to do the farm work. In his teens, Anton displayed his determination to be the best at everything he did by winning plowing competitions at the district and regional level. He was always motivated to seek the best information on all aspects of agriculture. Anton attended locally-sponsored youth agriculture training programs and from 1939 to 1940, the Agriculture Diploma Program at the University of Manitoba.

Married in 1941, Anton and Adeline developed a highly successful farming operation. Anton attributed their success to the skill and vision of his life partner Adeline, who participated in every aspect of the farm business. This team approach resulted in many successes in local, provincial, national and international competitions.

Potatoes were the commodity that brought the Chorneys wide-spread recognition. During the 1950s they won 19 championships at the Brandon Winter Fair. Their entries at the Toronto Royal Winter Fair produced National and International Championships for table potatoes in 1959 and 1961 and for seed potatoes in 1960, 1961, 1963 and 1971. Adeline’s eye for quality and attention to detail resulted in her becoming a judge of potato classes at the Royal Winter Fair during the 1970s.

The Chorneys were involved as 4-H club leaders in their community for many years as well as in potato and seed grain production extension activities sponsored by Manitoba Department of Agriculture. Anton served as a director of the Vegetable Growers’ Association of Manitoba for 23 years and its president for two, a member of the Manitoba Seed Growers Association for 35 years and a director for two, a member of the Selkirk and District Hospital Board for 12 years, and a founding member of the local volunteer fire department for 13 years. Anton was known to many Manitobans because of his regular media interviews forecasting the weather based on his astute observations of the natural environment.

Manitoba is a richer place because of the contribution of Anton and Adeline Chorney to the economic and cultural mosaic of the province’s agricultural industry.