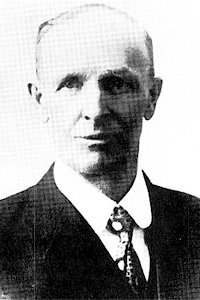 Spencer Argyle Bedford was born at Busted, Sussex, England in 1851. His family emigrated to Canada when Spencer Bedford was eleven years old and took up land in Ontario. Here he learned the art of surveying and was soon guiding parties of settlers into the west in search of land.

He traveled widely with Dr. W. Saunders to select suitable sites for the Experimental Farms in Manitoba and Northwest Territories and aided in the establishment of the Central Farm in Ottawa. In 1888 he was appointed the first superintendent of the Experimental Farm in Brandon. His early work involved the development of the best methods for bringing the prairies under cultivation and the introduction of many varieties of cereals, grasses, vegetables, fruits and breeds of livestock from many parts of the world to test their adaptability to the Canadian prairies.

Upon retirement from the Experimental Farm he was asked to become professor of Field Husbandry at the Manitoba Agricultural College. Mr. Bedford was always in demand at public engagements, speaking at many farmers’ meetings and meetings of Women’s Institutes.

He was regarded with such respect that the government appointed him Deputy Minister of Agriculture. In 1915 he was appointed chairman of the weed commission, which was established to solve the weed problem developing in Manitoba.

In 1921, at the age of 75, the University of Manitoba honoured him with the degree LL.D., honoris causa. The following year he was honoured by having his picture hung in the college hall and his name inscribed on the Roll of Fame.