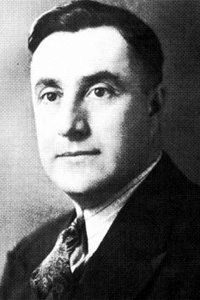 Cyril Leonard (Andy) Anderson was born June 28, 1904, one of five children, in the Armstrong’s Point district in Winnipeg. He graduated in 1920, moved to Chicago to work with the Western Electric Company, returning to Winnipeg in 1927.

In the late 1920’s Andy joined Canada Packers’ Feed Division where he helped develop and introduce modern nutrition via the addition of bone meal, tankage, fish meal and alfalfa to farm-grown grains. He advocated sound feeding and management practices to achieve optimum production in poultry and livestock operations. In 1939 Andy formed his own company, Feed Rite Mills, to pursue his profound interest in advanced feeding practices. His first major accomplishment was the improvement of poultry breeder rations which markedly increased production and hatchability.

Andy was one of the first feed manufacturers to employ a professional animal nutritionist and agricultural graduates trained in animal and poultry science. He was the first fed manufacturer in Western Canada to use canola meal; one of the first to bring in soybean meal and to use supplemental phosphate. He began a newsletter and spent much time with his customers constantly striving to give Manitoba producers the knowledge and products to keep them in the forefront. In the process he made many lifelong friends across Manitoba and Canada.

In 1977 Andy was honoured by the Canadian Feed Industry Association for 50 years of dedicated service. The Manitoba Hatchery Association affectionately bestowed on him the Buffalo Rooster award. He was a long-time member of the Griffins Service Club, the Feed Manufacturers’ Association, and the St. Charles Country Club.

His life spanned a period of great change. With his energy, his appetite for new ideas and his itch to put them into practice; it was inevitable that once he entered the feed industry he was destined to make a difference. He was one of those rare, forward thinking persons who through their energy and vision lead and changed things to such a degree that others are forced to follow. He sold Manitoba’s livestock and poultry producers on modern feeding and management programs and undoubtedly made a contribution to Manitoba’s economic growth while helping our poultry and hog producers to be second to none in Canada.