Nominated by: The Rural Municipality of Brokenhead and Alf Chorney 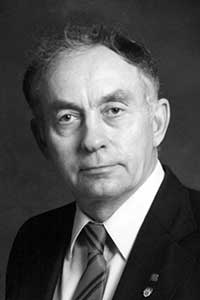 Clarence Baker was born to Anton and Pauline Baker on July 7, 1928 in Cromwell, Manitoba. Anton immigrated to Canada with his parents from Beckersdorf, Austria in 1896. In 1951 Clarence and his new bride, Ilene Weidman, took over the third generation family farm which included the 240 acres of land that his grandfather had purchased shortly after arriving in Manitoba. Working as a team, the Bakers expanded their farm operation while raising their five children: Corrine, Debbie, Andy, Curtis and Terry. In 1998 the farm was recognized as a Century Farm. Clarence and Ilene’s grandsons, Drew, Reid and Riley Baker are the fifth generation to work the land alongside their parents, Andy and Jan.

Clarence was an innovative, progressive farmer who adapted to the changes in agriculture. A strong proponent of the Provincial Extension Service, Clarence encouraged its staff to share new agricultural information and technology with his friends and neighbours. He was the first farmer in his area to grow canola, sunflowers and faba beans. Clarence installed one of the first grain dryers in the area and later equipped it with a heat exchanger to reduce operational costs. He also installed a mechanized cleaner in his hog finishing barn. In 1970 his sweet clover won first prize at the Toronto Royal Winter Fair. In 1984 the Red River Exhibition Association recognized the Bakers as Farm Family of the Year.

Clarence was also involved in his community. Over the years he sat on numerous boards and committees of local organizations. Examples include the Cromwell School Board, St. Mary’s Roman Catholic Parish Council, Beausejour Chamber of Commerce, Knights of Columbus and the Lions Club, as well as local sports groups. He served as Reeve of the Rural Municipality of Brokenhead from 1976 to 1998 during which time it implemented several innovative community projects. Clarence was intimately involved in attracting the Polaris snowmobile manufacturing plant to Beausejour and also served as president of the Canadian Power Toboggan Championships. Clarence was instrumental in developing the East Gate Lodge and Stony Plains Terrace where he became a resident in later life.

In 1986 Clarence was elected as a Member of the Legislative Assembly of Manitoba for Lac du Bonnet Constituency. Clarence was a longstanding Manitoba Pool Elevators delegate and served on the Boards of Manitoba Crop Insurance and the Union of Manitoba Municipalities. He was a strong supporter of the Canadian Wheat Board and orderly marketing for farm products.

Clarence is remembered as a person of integrity and strong values. He was respected for his vision and leadership in agriculture and his contribution to the betterment of rural life.