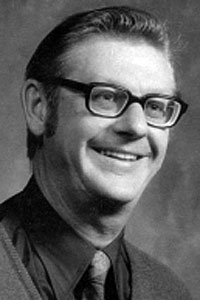 Garlin Vincent (Ole) Olson, son of Ole and Mable (Lindgren) Olsen, was born in Biggar Saskatchewan. Garlin graduated from the University of Saskatchewan in 1948, with a Bachelor of Science Degree in Agriculture. He worked at post graduate studies in Bio-Chemistry, and at experimental work on liver disorder common to chickens. He won the Handleman Scholarship.

After working for the Cockshutt Farm Equipment Company, he was employed for the next twenty years as a livestock nutritionist by the Federated Co-operative. It was his formulated livestock feed that was used by the Co-op feed mills in Western Canada. For the last fourteen years he served as a livestock specialist for the Department of Agriculture, in Swan River.

Mr. Olsen’s influence on agriculture went beyond his employment as a livestock specialist. He was prepared to help people with their different problems e.g. planning a hog barn, analyzing a feed mixture, or improving on some management skills. The most outstanding feature of his help was that he gave farmers the confidence to try something new, and the opportunity to feel good about themselves and farming.

The Northwest Manitoba Sheep Association, producers from the Parkland Region, owe much to “Ole’ for he helped them: to organize, to improve the industry and to get started on the ROP program. He worked on a manual for sheep producers, and although it was never completed, it is still a valuable reference.

In the last few years “Ole”, was mainly interested in the swine industry. He worked on many committees: The Manitoba Pork Seminar Organization, the Weanling Pig Sales Investigation Group, and the Hog Days Organization. It was the steering committee of the Manitoba Government, on which he served, that introduced the A.I. program to Manitoba hog producers. Thus was started one of Manitoba’s two A.I. units, which sold semen provincial and internationally. He initiated the formation of the Northwest Swine Breeders Association to help develop markets for breeding stock. This led to the export of Manitoba breeding stock to Japan. Through his influence, an F.D.R.A. demonstration project, illustrating high herd health management in combination with innovative and aggressive breeding stock sales, was started.

Mr. Olsen was known for his vision of what could be, his faith in human nature, his enthusiasm, and his love of life.