Nominated by: Jack D. Giles on behalf of the Manitoba Farm Writers and Broadcasters Association 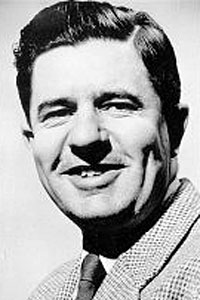 Frank Lionel Moore, son of Alice and William Moore, was born in Vancouver and later moved to Manitoba. He was educated at the Provencher School in St. Boniface, and at the University of Manitoba. In 1938 he married Isobel McIntyre and they raised three children Lionel Jr., Jerry and daughter Terry.

In 1943 he started to work in Brandon as a Cattle sorter, and then went to the Winnipeg Union Stock Yards. He became a cattle buyer for Canada Packers, and four years later, started giving the Winnipeg livestock market reports for CJGX Yorkton. In 1950 he was invited to be the farm commentator for the Manitoba Farm Broadcast on CBW Winnipeg.

For more than a quarter of a century (1950-1976) Lionel was an important part of the Farm Department of CBC Winnipeg. During this time, his was a welcome voice reporting farm markets. Farm listeners throughout the West, appreciated the information which enabled them to follow better farm practices.

When television came to the Prairies, he, as supervisor of the Farm Department, was involved in two programs. The first program he directed toward the farm audience. By the end of that year, the “Country Calendar” television show went on the air out of Toronto. The next year, the “Prairie Country Calendar” with Lionel as host and editor was broadcast from Winnipeg. Today, “Country Canada” a national program, is the outgrowth to that Winnipeg broadcast. Lionel also developed an instructional series, called “This Business of Farming” which was the first of its kind, and it continued for five years.

In the last few years of his career he became associated with the United Nations. He visited India, Pakistan and Sri Lanka as an observer and reported to the director of the World Food Program. He justified to farmers how their contributions to the Program were being spent. Lionel was involved in the Caribbean area and the international project of controlling the Mediterranean fruit fly by radiation.

Lionel Moore’s distinctive friendly drawl is gone from radio farm homes. He served the farm people well at a time when extensive changes, in farm practices, and in the social fabric of the rural areas, were happening. He saw and recorded these changes, and helped rural people adapt to them. Lionel was always the friend and champion of the farm family and its community.