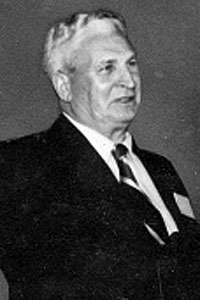 Tully McKenzie, the second son of Mr. and Mrs. W.K. McKenzie, was born on his grandfather’s “homestead” (NE 1/4 36-13-19) in the Tremaine School District. He is a third generation of the McKenzie family to live in Canada.

Tully received his elementary education at Tremaine School, his Secondary at Rapid City, and a diploma in Agriculture at the University of Manitoba. In 1930 he married Ethel Bridge. They framed the “homestead” and raised a family of four, three daughters and son. During the thirty years of farm life, Mr. McKenzie was very active in the community. He served as chairman and secretary-treasurer of the School Board. He was also a steward and elder in the local United Church. For ten years he served as the secretary of the Rapid City Pool Elevator Board. This organization introduced a “Blue Cross Plan” and a seed club to the area. These efforts raised the quality of life and improved the standards of grain grown there. He was one of the exhibitors of the first Rapid City Boys and Girl’s Club organized in 1916, and was also director of the Agricultural Society for many years. From 1952 – 62 he provided the leadership for the Swine and Calf Club.

His interests were not only in agriculture but also in people. In the mid forties, he formed the Rapid City Film Council. They made educational films available to schools and communities. Tully was a charter member of the Minnedosa Credit Union having been instrumental in its formation in 1947.
In 1960 Tully and Ethel moved to Brandon and he served as: Public Relations Officer for the Dairy and Poultry Co-operative, a Manitoba Crop Insurance adjuster, and a livestock inspector for the Department of Agriculture.

Having a long standing interest in native people, he accepted employment with the Department of Indian Affairs as a Land Use Officer at the Sioux Valley Reserve.

His leadership and organizational skills made him a successful champion of many worthwhile causes. He became a charter member of the Assiniboine Historical Society, and contributed significantly to the formation of the Daly House Museum. In 1970, Manitoba’s Centennial Year, he served as the chairman of the Centennial Pioneer Committee. It was formed to honour pioneers of the Westman Region. A special film “A Glimpse of Yesteryear” was the result of his committee’s work.

Not least of all was Tully’s contribution as one of the founders of the “Manitoba Agricultural Hall of Fame”. He was instrumental in calling the initial meetings. A Provisional Board was established, and Mr. McKenzie was chosen as its first chairman. He performed a very important role during the early years of this organization.

From the foregoing, it is quite evident, that he has made valuable contributions to enhance the lives of many people.