Nominated by: Rural Municipality of Argyle 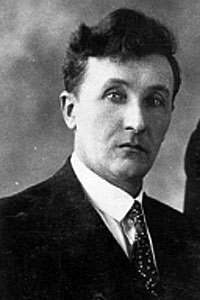 Arthur Lombaert was born on March 6, 1890 in Belgium, immigrating to Canada with his parents in 1906. After spending a year in Quebec, the family moved west to homestead at Mariapolis. Arthur married Rachel Rosier in 1912 and they raised a daughter and a son.

Mr. Lombaert raised purebred Shorthorn cattle, but his true interest was in heavy horses. In 1921, he purchased a purebred Belgian stallion and traveled the country providing many farmers with fine draught offspring.

Arthur raised horses for show, winning top prizes at fairs across the West. He assisted farmers in beginning their own purebred breeding stables. He assisted exhibitors in learning good feeding methods, grooming techniques, and proper foot care, along with halter-breaking and preparing animals for the show ring. He had a special interest in 4-H Clubs and often judged Colt Shows.

He acted on the Selection Committee to select those Manitoba Belgian and Percheron horses which would go to the Toronto Royal; served as a director on the Belgian Horse Breeders’ Association of Canada, 1935-40; was a highly respected Judge of all Heavy horse breeds; through Arthur Liffman, a horse dealer in Europe, imported horses from lineage in Canada and the United States.

Arthur canvassed for the 7th Victory Loan in the Rural Municipality of Lorne during the World War II (One Million dollars) and served on Town Council of Mariapolis.

Although Arthur gained respect for his contribution to the farming community and on Town council, he earned national and international recognition and reputation as a connoisseur of fine horses. His expertise in the husbandry of the land and horse-breeding he willingly shared with everyone. This had a tremendous impact on farming practices in the Canadian West.