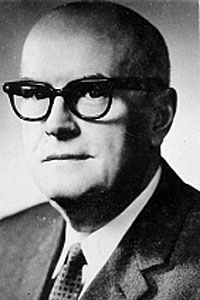 David C. Foster was born August 20, 1899, in the Lena District where he grew up, becoming a 4-H Club member. He became a school teacher and taught in local schools. Mr. Foster attended the University of Manitoba and graduated in 1925 as the Lieutenant-Governor Gold Medalist. He and his wife, Mary Perick, had a daughter and a son.

His first involvement with the Department of Agriculture was at Lethbridge, Alberta, in poultry. During his 40 years of service to the Province of Manitoba (1926-66), he was primarily responsible for the development of the multi-million dollar poultry industry, developing the Manitoba Approved Flock. He was a Senior Coach to fifteen of the Manitoba Poultry Teams which took part in national competitions at Toronto with twelve first-place showings. In addition, he implemented many progressive concepts and administrative policies for the agricultural industry including programs which trained rural leaders and, equally important, prepared rural people to accept a new era of farming practices which, in the due course, greatly improved the quality of life in Manitoba’s farms.

His deep understanding of farming and farm related problems together with his capacity for leadership was attested to by his election or nomination to a multiplicity of local, provincial, and national committees. It is no exaggeration to state that D. C. Foster unselfishly dedicated his life to the improvement of rural communities, not only in Manitoba, but throughout Canada itself. His attainment of high office enabled him to pursue his goal of making the rural areas a better place in which to live.

His role in the history of agriculture in Manitoba cannot be pinned to any one specific contribution to the advancement of agriculture in the province.
His forte was his ability to bring together influential groups and have them act in unison and sufficient harmony so that the wheels of agriculture turned forward while he himself remained in the background. Mr. Foster served rural Manitoba and his University with distinction as a policy maker, innovator, decision maker and unobtrusive leader. He was an outstanding pioneer civil servant in the highest sense of the word.