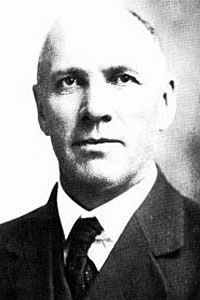 Born near Neustadt, Grey County, Upper Canada, Valentine Winkler moved to southern Manitoba in 1879 following the death of his father. He worked in his brother’s lumberyard until opening his own grain and lumber operation at Morden in 1883.

Winkler began farming in 1888 and was elected the first reeve of the Rural Municipality of Stanley, serving from 1890-92. In 1892, the village of Winkler was established, named for him. Here he owned and operated a grain elevator and lumber business. During that year, he was elected to the Manitoba Legislature and was a member until his death, serving five years as the minister of agriculture and immigration from 1915-20.

He was always interested in the improvement of farming and the quality of farm life, especially for new settlers. During his tenure in the cabinet, many legislative initiatives were taken to further the interest and well-being of the province’s agricultural community. Some of the more important pieces of legislation included: the Settlers Animal Purchase Act, which allowed newcomers in the Interlake district to acquire cattle on credit; the amendment of the Noxious Weeds Act and the appointment of a Provincial Weeds Commission; the Seed Grain Act, permitting municipalities to provide seed grain on credit; the Farm Implements Act, regulating the sale of agricultural machinery; and the Producer Dealers Act, requiring the licensing and bonding of individuals selling farm produce.

In addition to an active public life, Winkler took a keen interest in community activities. He was a member of the Masons and a 25-year member of the I.O.O.F. A kind and thoughtful man, it can be truly said that Winkler made an important contribution to the economic and social life of Manitoba.