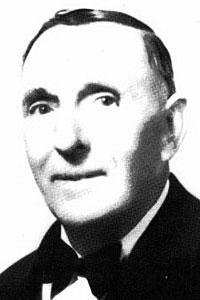 William Whitelock, a native of Glasgow, Scotland, emigrated to Manitoba in 1903. Following a brief stay at Minnedosa, Whitelock moved to the Roskeen district near Kelwood.

He farmed in this area for nearly 60 years and during that time received worldwide recognition for his cereal grain crops. In 1919, Whitelock grew his first registered Marquis wheat and by 1922 it was chosen as the best Marquis wheat in Western Canada. From that time forward he received provincial, national and international acclaim. In his early years as a seed grower, Whitelock received orders for seed from Czechoslovakia, Germany and Russia, as well as throughout Canada. In total, Whitelock won eight world championships for his wheat, oats and barley.

He served as president of the Manitoba branch of the Canadian Seed Growers’ Association from 1940-45. In 1940, he was presented with the Robertson Associate medallion by the C.S.G.A. in recognition of his contribution to Canadian agriculture. Whitelock also received his 40 year seal from the seed growers, acknowledging 40 years of successful pedigreed seed production. In 1965, he was the recipient of the Keystone Award, a trophy reserved for Manitoba residents who have won world championships.

Not only did Whitelock achieve worldwide recognition, but he gained importance in his own community as well. He served as president and director of the Kelwood Agricultural Society; took an active interest in the 4-H movement and was one of the leading organizers in the Kelwood area; was a member of the United Church choir for some 51 years; and was a life member of the Masonic Lodge of Manitoba, having joined St. John Dalmuir, Scotland, in 1902.