Nominated by: The Community of Deloraine and the R.M. of Winchester 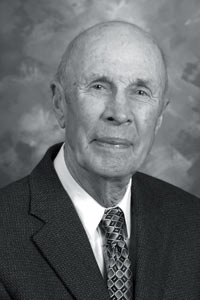 Ralph Jacob (Clint) Whetter was born June 20, 1919, in the R.M. of Winchester. He attended both public and high school in Dand. In 1938, Clint enrolled in Agriculture at the University of Manitoba. In 1942, following graduation, he enlisted and went overseas with the RCAF. In 1945, after flying 55 bombing missions, Clint returned home to Manitoba. Later that year he married Dorothy Keeler. Together they raised four children: Dale, Glen, Ellen and Bernie.

The Whetter home, yard and farming operation reflected Clint’s progressive agricultural practices. He was particularly proud of, and known for, his excellent herd of purebred Herefords. Clint’s interest in researching and adopting new farming methods resulted in the Whetter farm always being on the forefront of modern agricultural technology.

Clint was a project and club leader with the Dand 4-H Belles and Beaux and served on the Provincial 4-H Council for three years. He believed it was important that young people became good public speakers and knowledgeable about meeting management and the democratic process. Clint was made an honourary member of the Canadian 4-H Council in 1997. As a result of his 4-H leadership over 50 years, in 2002 Clint was recognized by the Canadian 4-H Council for his outstanding contributions to the youth of rural Manitoba. He was also a recipient of the Queen Elizabeth II Golden Jubilee Commemorative Medal.

For more than 20 years, Clint was a member of both the Deloraine Fair Board and the Agricultural Society. He served in various capacities as the director, secretary and chairman on the Dand local of Manitoba Pool Elevators (MPE). He spent five years on the province’s Extension Advisory Council, 10 years on MPE’s Advisory Committee and six years on the Hartney Credit Union.

As a veteran, Clint was a member of the Hartney Legion and a frequent leader of Remembrance Day services.

Besides serving on the local hospital board for 17 years, Clint was a volunteer ambulance driver and taught First Aid and CPR courses. As faithful members of the Dand United Church, the Whetters taught Sunday School and led youth groups.