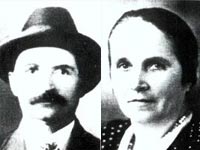 Mr. and Mrs. Theodosy Wachna immigrated to Canada from Western Ukraine near the turn of the century. After settling on homesteads in the Stuartburn area, they met and married in the fall of 1897. Theodosy had learned English and was thus chosen by immigration officials to help 30 new immigrant families homestead there. This responsibility for the welfare of others became an outstanding feature of his life’s work. By 1898, with his assistance, a viable community of over 500 people lived in the vicinity.

Mrs. Wachna was a remarkable asset to her family and friends. She had helped her father with the task of “homesteading” and after her marriage, she worked alongside her husband in order to make the farm productive. Furthermore, when Theodosy became involved in municipal duties, Anna provided the guiding hand to do the farm chores and to look after the growing family.

The Wachnas moved from the farm and started a general store, a first in the neighbourhood. The store thrived and soon a second one was started in Gardenton. These stores were a vital part of the community. At the store, the local farmers could barter or sell their crops as well as use it as a social centre. New settlers required special services. Theodosy assisted by acting as an interpreter, commissioner of oaths, postmaster and even as an emergency dentist. He was also involved in organizing a new municipality Stuartburn new school districts and the building of roads and bridges.

The depression of the thirties was a severe test for the community. Anna’s qualities of friendliness, thoughtfulness and kindness were highly valued. There are many stories to be told about her thoughtful actions to children and friends during these hard times. Mr. Wachna helped many farmers whose situations were quite desperate. They had little or no money and he would help by paying for their costs of farming.

Mr. and Mrs. Wachna stand as proud examples of the Ukrainian pioneers who worked hard and helped others to gain a foothold in this, their new country. Theodosy was a man of strength and indomitable courage. Anna was a woman of strong faith, determination and positive actions. They served their community with integrity and faithfulness.