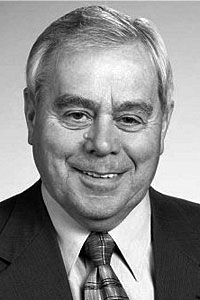 William (Bill) Vaags was born in 1934 in the Netherlands and came to Canada with his family in 1948. Bill started his lifelong commitment to agriculture when his parents rented a dairy farm near Dugald. In 1959, Bill and his wife Bertha started their own dairy, switching to hog production in 1961. In 1974, the family took over a 300-sow farrow-to-finish operation, doubling its size within five years. Bill was a leader in the use of artificial insemination and environmentally sustainable farming practices.

Bill has been a director of Manitoba Pork since 1974, and served as chairman from 1979 to 1989. He served as a director of the Canadian Pork Council (CPC) from 1981 until 2005. While president, he was influential in resolving hog and pork trade disputes between Canada and United States. Bill participated in the first World Livestock Conference in Denver, was a delegate to the International Federation of Agricultural Producers in Bonn, served in a consultative role during the Uruguay Round trade negotiations and attended the General Agreement on Tariffs and Trade (GATT) talks in Brussels and Geneva. As a global agricultural ambassador, he chaired the Sectoral Advisory Group on International Trade and served as a member of the International Trade Advisory Committee to the Canadian government.

Bill was a founding director of Canada Pork International and served as vice-president and president, promoting the Canadian pork industry around the globe. His active role in numerous overseas trade missions furthered the building of strong export trading relationships. In 2004, Bill co-chaired the 15th World Meat Congress in Winnipeg.

As a representative of Manitoba’s pork industry in Japan, Bill actively promoted a unique exchange program that has connected Manitoba’s 4-H youth to Japanese students. The Vaags annually welcomed visitors from Japan and their Canadian 4-H hosts at their farm.

Bill and Bertha have five children: Rick, Nancy, Darlene, Brenda and Adriana and 16 grandchildren. In 1987, Bill and Bertha were named the Red River Exhibition Association’s Farm Family of the Year. In 2002, their outstanding contribution to the pork industry was recognized by Manitoba Pork Council with the Swine Stewardship Award.

As a “consensus builder,” Bill sacrificed time and personal gain to further the well-being of the Manitoba and Canadian swine industry.