Nominated by: Department of Agribusiness and Agricultural Economics Faculty of Agricultural and Food Sciences, University of Manitoba 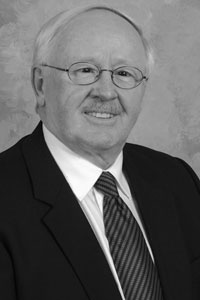 Ed Tyrchniewicz was born on January 20, 1941, and grew up on a farm at Prairie Grove, just outside of Winnipeg. He attended a one-room, one-teacher school up to grade eight. Following high school at Provencher Collegiate in St. Boniface, Ed attended the University of Manitoba from which he obtained a degree in agricultural economics in 1962.

Ed’s love of agriculture and his interest in policy was stimulated by professors such as Clay Gilson and Art Wood. This led him to pursue post graduate training in agricultural economics at Purdue University. Here he was given both the Outstanding MSc Thesis Award and the Outstanding PhD Thesis Award by the American Agricultural Economics Association in 1964 and 1967, respectively.

Ed served as Professor and then Department Head of Agricultural Economics at the University of Manitoba. He then served a term as Dean, Agriculture & Forestry, at the University of Alberta before continuing his career in Manitoba. Over his long career, he participated in numerous provincial and national public inquiries. Many of his recommendations shaped the development of Canadian and international agricultural policy and programs related to sustainable livestock production, grain handling and transportation, and natural resource management. He also undertook short-term assignments in countries including Ukraine, Bangladesh, Thailand, Kenya, India, Argentina and China.

He supervised more than 30 post graduate students to thesis and degree completion, 11 of whom were PhD candidates. He served on more than 50 examining committees, refereed 16 journal articles, contributed to six books and more than 55 research reports. Ed produced more than 130 conference papers, popular articles, and presentations. He has had a tremendous impact on Canadian and overseas agricultural policy through mentoring students and others interested in the subject.

Ed’s distinguished career was aided by his supportive wife and constant companion, Peggy (nee Witty) of Russell, Manitoba, whom he married in June, 1963. They have two children, Allen and David, both of whom are involved with the agriculture sector. Ed and Peggy are also the proud grandparents of three grandchildren and two great grandchildren.