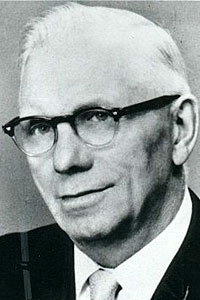 Harvey Tolton was the third member of a family of six (three boys and three girls). His parents were pioneers. They came from Bruce County, Ontario, and settled on E.1/2 11-11-24 in the R.M of Woodworth. He and Jennie Eleanor (Titmus) Tolton were married in 1919, and raised five children, one boy and four girls. Since then grandchildren and great-grandchildren have become part of the family.

Harvey attended: the elementary school, Verity, the Kenton High School, and the Manitoba Agricultural College. He graduated from the College with a Bachelor of Science in Agriculture. For his outstanding studies, he was the recipient of the Lieutenant Governor’s Medal. Later in life, he served on the Brandon University Board of Governors for thirty years, and a decade later, in 1976, he received an honorary Doctor of Laws.

In the 1920s he started purebred herds of, both, Shorthorn cattle and Yorkshire pigs. He, also, began to grow registered seed grain. Harvey won many awards at fairs and exhibitions. His purebred stock and seed grain were soon recognized as superior contributions to the farming industry. He received the “Master Farmer’s Award” in 1934, (the youngest farmer ever to receive the award.)

Mr.. Tolton was a very active contributor to his community. For many years he was the leader of the Oak Lake Beef Calf Club. His positive influence upon the participants can be attested to by the former members of the Club. He served: in his church on the local school board, on the Oak Lake, and Harding Agricultural Societies, on the council of the R.M. of Woodworth, and as director and president of the Manitoba Swine Breeders and Shorthorn Associations. He also served as a director of the Canadian Shorthorn Association.

In later years when he retired to Brandon, he continued to be interested in sports, fraternal organizations, and agricultural exhibitions. He grew registered oats and exhibited them in competitions. He won prizes at: the Brandon Winter Fair, the Canadian Western Agribition in Regina, and the Toronto Royal Winter Fair.

Awards received during his lifetime included: the prestigious “Robertson Association Award” and the “Manitoba Golden Boy Award.” These are an indication of the feelings of esteem people felt for this man. He was an outstanding citizen, and a supporter of an improved community, province, and country.