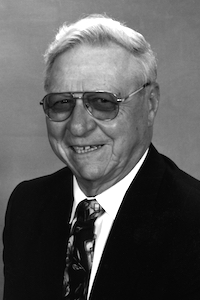 Hayden grew up on the family farm near Otterburne West in Manitoba, with his parents, Roy and Elizabeth, and three older brothers, Clayton, Garnet and Wallace. He graduated from the University of Manitoba with a BSA in 1949. His “aggie” classmates nicknamed him “Doc Tolton,” as he always had thoughtful and concise answers to questions in class. Hayden’s natural ability to mentor served him well in his first professional job as agricultural representative in Holland, Manitoba. It was there that he met his wife Joan Sundell. Their two children, Tom and Aileen, both chose to follow in their father’s footsteps, obtaining their degrees in agricultural science. The family also includes four grandchildren and one great-grandchild.

Always committed to soil conservation and good crop management, Hayden accepted a position as soil specialist with the Manitoba Department of Agriculture in Winnipeg. During this period, his interest in the subject led him to obtain his M.Sc. in soil fertility and statistics from the University of Manitoba in 1957.

In 1962, Hayden was hired as Research Director with the newly formed Manitoba Crop Insurance Corporation (MCIC). As Manitoba was the first province in Canada to offer crop insurance, Hayden consulted with his American counterparts to learn from their experience.

Hayden’s major contribution during this period was his work on soil productivity mapping and geographic risk areas utilizing soil type data, precipitation statistics, and a farmer’s cropping and yield history. His main focus was to improve the accuracy and dependability of crop production and management records as the base for establishing insurance premiums. Through the years, this data bank became the main source of reliable, multiyear crop production and management data available in the province. His methodology is still being used today.

Later as Manager of MCIC, Hayden generously shared his expertise with other provincial crop insurance corporations. A special highlight was his return to the US, not as a student, but in a “teaching” role, where he shared the Canadian experience with crop insurance with the Agriculture Committee of Congress in Washington. His mentoring extended internationally in the later stages of his career to work with countries such as Indonesia and Trinidad through his contracts with the United Nations Food and Agriculture Organization.

From grain farmers in Manitoba to vegetable growers in Trinidad, there is a large debt of gratitude owed to Hayden Tolton for his ground breaking work with crop insurance. It has provided Manitoba farmers and thousands of others with risk protection insurance options vital in today’s high-tech agriculture.

Hayden also contributed to his community. He served as leader of the Boy Scouts, a board member of both the Portage Industrial Exhibition and Rotary Club International. He was a canvasser for United Way and Cancer Care, and was active in his church.