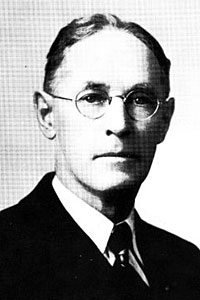 Born in York County, Ontario, Milton Tinline came to the Elkhorn area of Manitoba with his parents. His father, who was a blacksmith by trade, took out a homestead of 160 acres near the town. Tinline undertook to clear and break up this farm.

At the age of 26, Tinline enrolled in a college course in agriculture. He had the honor of being the first student to register in the first agricultural college in Western Canada at Winnipeg.

Tinline returned to Brandon in 1924 as the superintendent of the Experimental Farm. Until his retirement from this position in 1946, he devoted almost his entire life to help Manitoba’s farmers with their problems. He addressed farmers meetings all over Manitoba. He took a leading part in farming methods that would meet the problems of drought and soil drifting and aided in the choice of the best varieties of crops to grow.

After his retirement from the Brandon Experimental Farm, he assumed the superintendent duties at the International Peace Gardens. Here he directed the vast work of landscaping, planting trees, shrubs and flowers.

In 1962, Tinline’s life achievements were recognized when he was presented with the Manitoba Golden Boy Award.