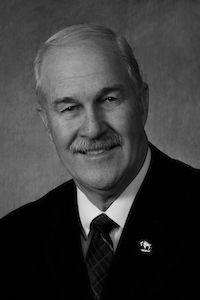 Born and raised in Winnipeg, Fraser Stewart attended St. John’s-Ravenscourt and the University of Manitoba, where he obtained a BSA in Animal Science in 1961. He received an MSc. in Animal Nutrition from North Dakota State University in 1963.

During his 39-year career with Manitoba Department of Agriculture, Fraser became known as “Mr. Grassland Specialist.” He distinguished himself nationally and internationally as an expert on grassland research and extension. In his quest to learn more about grassland agriculture, he traveled extensively within Canada and abroad—the USA,Australia, China,Argentina and the UK. His impact on forage and livestock systems in Manitoba and across Canada has been significant. Besides providing technical support to district agricultural representatives, local farmers and producer groups in all aspects of forage and livestock production and management, he has been involved in applied research and on-farm demonstration projects. Always committed to sharing information with producers and industry and extension staff, Fraser was one of the initiators of the Manitoba Grazing School, the Manitoba Forage Symposium, the Manitoba Provincial Pasture Tour and the Manitoba Grazing Clubs. He was also involved in the development of the Green Gold program to highlight the importance of harvesting of high quality forage, the development of baled silage technology, and the identification of new forage markets. Fraser has worked with producer groups to improve the utilization of hog manure as a fertility source for forages.

After retiring as Grassland Specialist in the Eastern and Interlake Region, a position he held from 1974 to 2002, Fraser became the Executive Director and Project Coordinator of the Manitoba Forage Council. Since retiring he has undertaken several teaching assignments on grassland technology and extension systems. He has also been involved in an extension project in Inner Mongolia, providing technical information to extension people working with local herders.

Fraser and his wife Beverley have three children and six grandchildren. They live on a small farm at Selkirk where they custom graze beef cattle, produce grass-finished beef and raise pastured poultry. Fraser has also been active in his community, serving on the executives of the Kinsmen, Rotary, the Agricultural Society, the St. Clements Historic Advisory Committee, Chief Peguis Park Historic Committee and the Selkirk Marine Museum.

Fraser’s knowledge, enthusiasm, creativity and ability to communicate with farmers, researchers and colleagues have been recognized by a number of organizations: Life Member Award and a Distinguished Agrologist Award from the Manitoba Institute of Agrologists, Certificate of Merit from the University of Manitoba, and Fellowship Award from the Agriculture Institute of Canada. Fraser has made two blades of grass grow where one grew before.