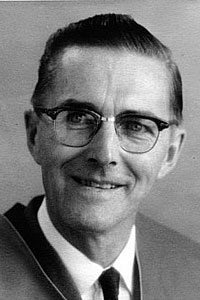 During a long and productive career at the University of Manitoba, Dr. Baldur Stefansson made a major contribution to Canada, Canadians, and people around the world through his outstanding work in developing canola.

Baldur, often referred to as the “father of canola”, was born at Vestfold, Manitoba, to Gudmundur and Jonina Stefansson, a pioneer Icelandic family. He was a modest individual with a keen sense of purpose. His dedication to the development of a new edible oilseed demonstrated his great ability to focus on solutions; his prodigious reading and astounding memory were a great asset leading to the success of his research.

Early in his search for an oilseed crop for Manitoba, Baldur identified the potential of rapeseed. However, rapeseed oil, with its high level of erucic acid, was a threat to human health, and rapeseed meal, because of its high level of glucosinolates, was unsuitable as feed for livestock. During years of research, Baldur collaborated with other scientists, chemists, nutritionists and plant breeders to reduce erucic acid and glucosinolates in rapeseed.

In 1974, Baldur registered Tower, the first “double-zero” canola variety, with oil low in erucic acid and meal low in glucosinolates. With the release of this and other new varieties, interest in canola soared. Before 1974, about 4,000 acres were traditionally seeded annually to rapeseed in Western Canada. By 1999, about 14 million acres were seeded to canola, supporting an industry worth about 2.5 billion dollars a year.

Baldur’s wife Sigridur, children Bjorgvin, Helga and Paul and their families survive him.