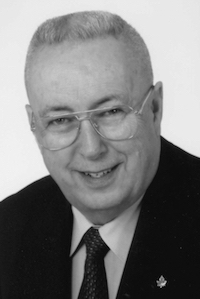 Robert Oliver (Bob) Douglas was born January 25, 1932, to Oliver and Eva Douglas of Minnedosa, Manitoba. His early education was received at Hazelwood School, Minnedosa Collegiate and United College. In his youth he was an active participant in 4-H, being a Manitoba representative to the National 4-H program at the Toronto Royal Fair in 1950. He was elected chairman of the first National 4-H Youth Council.

In 1956 Bob married Shelagh Sutherland and together they raised a family of three: Barbara, John and Anne.

Bob’s life-long contribution to the Manitoba agricultural community began with his appointment as Youth Director for the Manitoba Federation of Agriculture and Co-operation (MFAC) in 1956. In this position he became Director and Manager of MFAC’s residential youth camp at Clear Lake. This association with Camp Wannakumbac lasted 31 years, from 1956-1987. Bob believed every child deserved a positive camping experience, and that this experience could play a significant role in developing confidence and leadership skills. Many Manitoba youth benefited from this camping experience under Bob’s guidance and went on to become leaders themselves in their respective areas.

Bob eventually became Executive Secretary of the MFAC and was one of the founding architects leading to the formation of the Manitoba Farm Bureau in 1965. He served as Secretary Manager of the Manitoba Farm Bureau until 1984. In 1983-84 Bob was at the forefront with initiatives leading to the formation of Keystone Agricultural Producers (KAP), which would become a respected farm lobby network. He served as KAP’s first General Manager until 1993. In his role as senior staff of Manitoba’s major farm policy organizations, Bob was heavily involved in the farm policy work of the Canadian Federation of Agriculture.

Bob served his community as an elected member of Winnipeg City Council for four terms from 1982-1992.

Since 1993, Bob has been appointed to serve on various national agricultural policy committees. In 2000 he received a six-year appointment as Assistant Commissioner of the Canadian Grain Commission.

For nearly fifty years Bob has willingly and conscientiously served his community, his province and his country for the betterment of the quality of life in rural Manitoba.