Nominated by: Peak of the Market 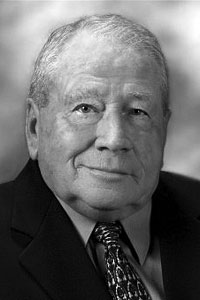 Edward James Connery was born and raised in St. Vital where his parents operated a market garden and greenhouse. He received his formal education at Glenlawn Collegiate. Ed and wife, Beverley Sager, have four children: Doug, Jackie, Jeff and Tim. In the late 1950s, Ed began looking around the province for an area more suited to vegetable production than the heavy clay soils of the Red River Valley. He decided that Portage la Prairie presented the best combination of soil, climate and location for large-scale mechanized production. In 1960 Ed established Riverdale Farms along the Assiniboine River near Portage la Prairie.

Ed was an industry leader in mechanizing the harvesting of carrots, onions and rutabagas, as well as their bulk storage, utilizing air circulation and humidification. He is a strong supporter of agricultural research to solve industry production, storage and marketing problems. His assistance contributed to solving problems related to: surface browning of carrots, neck rot in onions, surface cracking of rutabagas and quality maintenance in broccoli. In his travels across North America and overseas, Ed was always looking for smarter ways to do things. Upon his return, he would share his observations. Some of Ed’s findings resulted in the development of new technologies and protocols which became standard practice in the horticulture industry in Manitoba and elsewhere. To ensure a reliable supply of workers for his labour-intensive operation, Ed was one of the first growers to provide housing for employees. Later he worked with government to bring in farm workers from Mexico.

Ed’s volunteer involvement in the industry and the community is impressive. He served as: a committee member or director of the Vegetable Growers’ Association of Manitoba; Chair, Manitoba Root Crop Marketing Board; and Director and President, Canadian Horticultural Council. He fought for fair prices for growers through orderly marketing which led to the establishment of Peak of the Market. Ed is actively involved in Rotary International, Trinity United Church, United Way, Portage Golf Club, Habitat for Humanity and Koko Platz Community Club. From 1986 to 1992, Ed was the Conservative MLA for Portage la Prairie. He served as: Minister of Labour; Minister of Environment, Workplace Safety and Health; and Minister of Cooperative, Consumer and Corporate Affairs.

In 1981 the Connery family was named Farm Family of the Year by the Red River Exhibition Association. In 1983, Ed was chosen Farmer of the Year by the Portage la Prairie Chamber of Commerce. He was awarded an honorary life membership in the Vegetable Growers’ Association of Manitoba in 1984.

Edward James Connery has been described as the father of modern commercial vegetable production in Manitoba and a community-minded family man.