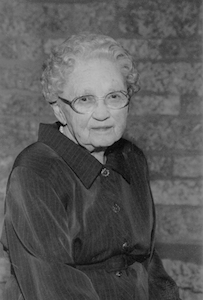 Ida Elva Cochrane was born on February 28, 1908 on the Thornbeck Farm in Shoal Lake Municipality, Manitoba. As second eldest of six children she grew up working hard on the farm. She took care of the horses, which included breaking colts for riding and driving. At thirteen she was driving a team and pitching sheaves at harvest time. Elva and her family experienced many hardships including two separate fires. After their house burned, her father and brother lived in the pump-house over the winter and Elva stayed with neighbours. She built a horse-drawn toboggan to drive to their farm each morning to cook for the men before driving the school van.

Adding to the family’s hardships were epidemics of influenza and scarlet fever. These necessitated days of missed classes since Elva was needed at home. Her schooling ended during the eighth grade. Elva married Wilkie Cochrane and devoted her time to raising their five daughters and four sons. Her family was and is her priority. She continued to assist with outdoor work, helping with harvests in the 1930’s and 40’s when hired help was unaffordable. Providing food and clothing for her growing family demanded many hours of gardening, canning and sewing. Nursing nine children through measles, chicken pox and whooping cough was no small feat.

Despite her commitment to her family, Elva found time to contribute to her community as a member of the Women’s Missionary Society and Ladies Aid of Lavinia United Church. Baby layettes, children’s clothing, crib quilts and Red Cross knitting were produced in quantity. She represented her church at Presbytery meetings in Winnipeg and helped to form United Church Women’s groups. She also sang in the choir.

Elva joined the Rebekah Lodge in 1947 and held all offices. In 1997 she was honoured with her 50 year Jewel. She was a member of the Lavinia Women’s Institute for thirty years. She taught 4-H sewing in Lavinia and Hamiota and taught quilting to ladies in her area. For thirty-five years she was a director of the Hamiota Agricultural Society and in 2001 she was honoured with a Life Membership in recognition of sixty years of exhibiting.

In 1988 Elva moved to Lilac Residence in Hamiota. At ninety-four this great grandmother still shares her baking and continues to make a significant contribution to her community. She is an example of pioneer spirit and fortitude. Her life is a tribute to the qualities of perseverance and personal pride inherited from her Irish ancestors.