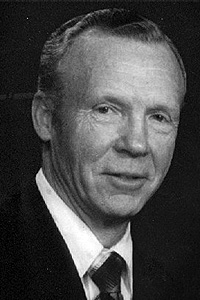 Douglas Roy Clark was born and raised in the Brandon area. He is the second son of Roy and Jessie Clark and grew up on their farm at 6-11-19w. He received his early education at Poplar Hill School in the R M of Daly, and later attended Brandon College. He served in the Royal Canadian Air Force, Radar Division, spending several years in Iceland. After his discharge he returned to the staff of the Canadian Bank of Commerce in Virden. However, poultry farming became his keen ambition. In 1948 he built a combined hatchery and living quarters on twenty acres of land on 18th Street North in Brandon. He hatched his first chicks in 1951, producing a total of 11,000 chicks a year. This venture was operated as a hatchery for 8 years when a new hatchery was built with a capacity of 65,000 chicks and turkey poults a week.

The most significant contribution Doug Clark made to Canadian agriculture was the development of outstanding poultry breeding stock. He was keenly interested in learning and applying the latest genetic principals in pure-line breeding and strain crossing. Knowledge, diligence and patience were needed to do this work and Doug was well suited to this type of discipline. Out of this work he developed the well known Paymaster 101 line, which has ranked as the best producing dual purpose layer across Canada. Breeding stock was sold in all provinces as well as exported to Germany and Ceylon. The Paymaster bird was noted for its livability, disease resistance and egg production capabilities. With these aggressive traits the Paymaster could compete against any North American and European stock.

Doug was never satisfied with ordinary results but always strived for better performance, with a goal of satisfied customers. Sanitation and neatness was a high priority in his operation and he was constantly aware of the importance that poultry health played in his business. Doug was the recipient of the Canadian Hatchery Federation Award for outstanding achievement in the industry. He also received the certificate of Membership to the Buffalo Rooster Club presented by the Manitoba Hatchery Association for devoted service to, and promotion of, the Poultry Industry of Manitoba.

Doug served his community through his avid love of hockey as a player, a coach and a manager. He touched the lives of many as he coached the College Caps for eight years and the Brandon Travelers for four seasons and then managed the Brandon Wheat Kings for the 1974-75 season. He was recognized for his service to the sport of hockey by being inducted into the Brandon University Bob Cats Hall of Fame in 1993.

Doug always quietly went the extra mile in establishing a trusted rapport with clients and staff. Forthrightness, integrity and dedication to his family, community and to excellence in Canadian agriculture, are characteristics recognized and appreciated by all who know him.