Nominated by: The Rural Municipality of Shoal Lake 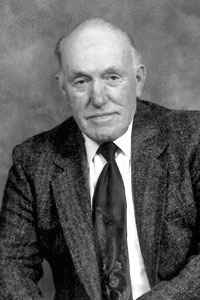 Wilf Chegwin was born and raised in Rossburn, Manitoba. In 1945, he married Thelma Menzies. The Chegwins lived at Shoal Lake where they farmed and raised two children, Betty Anne and Wayne.

With one gravel truck, Wilf started a construction business. When he sold the business in 1967, he had 40 employees. Wilf then expanded his farming operation by buying 300 Hereford cows and some farm machinery. In 1969, Wilf agreed to use his cows for experimental purposes for the Foreign Breeds Evaluation Program in cooperation with the Brandon Research Station.

Wilf was one of the first people in Manitoba to import Simmental cattle from France. He set up a quarantine station close to his farm for the use of the Federal Department of Agriculture. Over the next 20 years, Wilf successfully showed Simmental and Limousin cattle at major shows from the Calgary Stampede to the Toronto Royal. In 1982, Wilf was involved in some of the first embryo transplants. He was a founding member of the West Central Simmental Association. Their annual sales were held in his heated shop for 15 years. Wilf was also a director of both the Manitoba and Canadian Simmental Associations. For many years, he showed a hitch of six Belgian horses at local fairs.

Wilf was an honorary life member of the Shoal Lake Agricultural Society and its president from 1991-94. Besides being instrumental in building the new arena at the fairgrounds, Wilf served on the steering committee that planned and oversaw the construction on the new Shoal Lake Communiplex. Wilf was a councillor for the RM of Shoal Lake from 1997-2001 and was vice-chair of the gasification committee which brought natural gas to the RM of Shoal Lake. He was a founding member of the Prairie Mountain Regional Museum Board and the council’s representative. He was also on the board of 16/21 Grain Processors Ltd. which proposed the construction of a farmer-owned inland grain terminal as a proactive response to changes in agriculture due to the loss of the Crow Rate. UGG ultimately built the elevator and opened the new facility in 2000. Wilf was an investor in EXP Feeds Inc., a feed processing company that was set up to process canola and peas into a protein meal for livestock.

In 1987, Wilf received the “Heart of Gold Award,” sponsored by Air Canada and the local newspaper, to recognize his contributions to the community. He also received the A.O. Henuset Memorial Distinguished Service Award from the Manitoba Simmental Association. His contribution to the cattle industry and the Simmental breed in particular has been substantial. Wilf helped to change the composition of commercial and purebred herds throughout the province and the country.