Nominated by: Rural Municipality of Daly 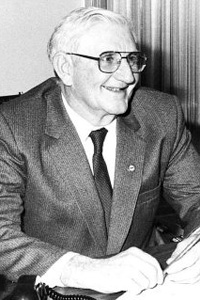 Albert Thomas (Ab) Chapman was born on February 3, 1918 and raised on a farm southeast of Rivers, Manitoba. He served as Councillor in the RM of Daly and as Reeve for forty-two years. His leadership was recognized by other rural councils who elected him for several terms as president of the Union of Manitoba Municipalities. He was also appointed to the Manitoba Municipal Board.

For twelve years Ab served on the local school board. He was instrumental in the construction of the Riverdale Hospital in Rivers where he organized and served on the board for thirty-four years. Ab was chairman of the West-Man Regional Development Corporation for ten years. He was one of the original directors of the Wheat Belt Community Futures Development Corporation. He attended meetings of the Ninette Sanatorium Board and the Pelican Lake Centre.

Since 1990, Ab has presented the “Chapman Museum Shield” for Best Farm Home Grounds in Municipalities of the Northwest Region Good Roads Association.

Ab was one of the sixteen members of the Industrial Commission to report provincially on Targets for Economic Development. He is a past director of Tourism Manitoba, was a member of Manitoba Travel and Convention Association and the Golden Boys Association. He was an associate member of the Manitoba Good Roads Association 1984–88.

In 1967 Ab and his wife, Harriet, turned a collector’s hobby into a treasure of regional heritage. The “Chapman Museum” consists of sixteen antique buildings located in a rural setting including a school, church, blacksmith shop, general store, railway station, house and also farm equipment. They used their own financial resources and accepted contributions from neighbours and friends interested in preserving history. The Chapman’s daughters, Lois and Linda always supported their parents. The church in the museum complex was dedicated to Harriet’s memory after her death in 1979. Artifacts have been loaned for filming several CBC television movies.

Ab participated in all these endeavours with a spirit of co-operation, good will and generosity of time. He continually gives credit to others. Many have sought his wisdom and advice.