Nominated by: Catherine Vanstone, President, on behalf of the Portage Industrial Exhibition Association 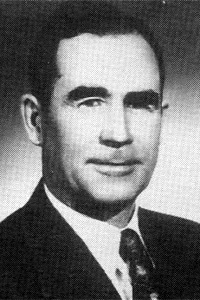 The Honourable Douglas Lloyd Campbell, son of John Howard and Mary Campbell, was born in Portage la Prairie. He attended elementary school at Flee Island, high school at the Portage Collegiate Institute, and university at Brandon College. Mr. Campbell took over the operation of the family farm in 1917.

In December 1920, he married Gladys Crampton, and they raised seven children, three boys and four girls, who have all had distinguished careers, and are a credit to their parents.

In 1922, he was elected to the Manitoba Legislature from the constituency of Lakeside, serving in this capacity until 1969. His 47 years of continuous service is the longest public service tenure in the British Empire. Mr. Campbell was appointed Minister of Agriculture in 1936 and 1942. He was given the additional portfolio of Manitoba Hydro, where he initiated a Rural Electrification Program making electricity available to every farm in Manitoba.

In 1948, he was elected Premier, an office he held until 1958. During his tenure, he appointed John Bracken to study the liquor laws and regulations and to bring in recommendations. These radically changed and modernized laws were studied by other provinces and served as the basis for their own changes. He also established an independent Election Boundary Commission, a first such study in Canada that was copied by others.

On his retirement from politics, he was elected Director of the Portage la Prairie Mutual Insurance Co. and the Manitoba Hydro Commission. Mr. Campbell had a great facility for remembering names and faces, and as a gifted orator was much in demand. His topics were wide ranging, and his talent of reciting popular poetry, and recalling a variety of his school selections, were outstanding abilities.

Mr. D.L. Campbell was a lifelong member of the Masonic Lodge. He was made Master of Assiniboine Lodge No.7 in Portage in 1922, Honourary Member of St. John Lodge No.10 in Winnipeg, and Honourary Past Master of Grand Lodge in 1975. He was also a member of the Royal Order of Scotland.

The Honourable Douglas Campbell will long be remembered as someone who made many contributions to making Manitoba a better place in which to live. He was a Gentleman, a great Statesman, a great Manitoban, and above all a great Canadian.