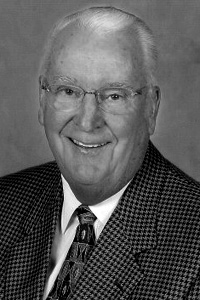 Bruce Campbell was born June 25, 1936 to Duncan and Kathleen Campbell, growing up on the family farm at Chater, Manitoba. He attended Clinton School, Brandon Collegiate and graduated from the University of Manitoba Faculty of Agriculture in 1958 with a major in Animal Science. Upon graduation he joined Feed Rite Mills.

In 1963 Bruce married Lesley Lorraine Gay. They have two children, Brock and Nancy.

In 1968, fuelled by vision and his entrepreneurial spirit, Bruce purchased 50% interest in a rural feed business in Landmark, Manitoba becoming sole owner nine years later. From that point he quarterbacked a team of partners and outstanding employees in turning Landmark Feeds Inc. into one of Western Canada’s leading agribusiness companies. At the same time he became well known himself as a businessman with vision and high integrity.

Bruce was able to make significant contributions to the development of the livestock industry of Manitoba. They include: aiding new producers to start their own operation; spearheading financing for the first caged layer barn; supporting and encouraging the development of the supply management system for poultry and dairy; promoting genetic improvements, the use of AI and high health hog standards. During that time the swine side of the business, Elite Swine Inc., had grown to become Canada’s leading swine infrastructure company. Bruce was instrumental in encouraging Maple Leaf Foods to locate their hog processing plant in Brandon.

As well as supporting rural communities, Bruce has served as Director of the Manitoba Institute of Agrologists, President and National Director of Manitoba Division of the Canadian Feed Industry Association (1983–1987), Co-Chair of the Fundraising Committee for the Large Animal Metabolic Unit at the University of Manitoba (1992) and as Director representing Manitoba on the Board of Agrifood Research and Development Initiative (ARDI) (1996–1999).

Bruce confirmed his interest in youth and agriculture when he and Lesley created the “Bruce D. Campbell” bursary fund at the University of Manitoba Faculty of Agriculture.

Bruce’s vision, coupled with the high value he placed on his partners, employees, customers and suppliers created an impetus for a very successful agribusiness in Manitoba.