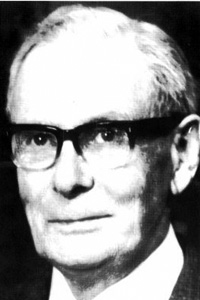 Dr. David A. Brown was born in Scotland. At a young age, he emigrated with his parents to the Deloraine area. There he finished his high school education and then attended and graduated from the Manitoba Agricultural College.

Even after he retired, he continued to be very busy until a serious fall in 1988 curtailed his activities. At the Brandon facility, he concentrated his efforts on 28 agricultural illustration stations that modeled the latest research and farm practices. He developed the orderly eight-year crop rotation system that proved its worth on numerous farms in the West. He helped to initiate cost-of-production studies and also succeeded in persuading his station operators to develop their horticultural skills in order to round out the farming skills that they passed on to others. His active part in locating and initiating the 1930s PFRA program in Manitoba helped farmers to cope with drought.

In 1946, he gave up going from station to station and took charge of the research work at the farm. He broadened and refined the studies to include the use of modern techniques. Brown introduced fertilizers and weed controls that revolutionized agriculture and caused production to skyrocket.

Brown served his professional associations well. On many occasions, he provided the leadership for these organizations to do an outstanding job. He will be long remembered for his aid to farmers and others interested in various phases of agricultural production. Because of his contributions as advisor, broadcaster, commentator and judge, he received the horticultural “Life” membership award.

Dr. Brown was also deeply involved in community activities. During the Second World War, he supported the war effort by selling war bonds. He also served on the planning and fundraising committee of the Knox United Church, as clerk of session and as a delegate to General Council. For many Canadians who knew him, Dr. Brown was a happy man and, like many pioneers, he was “devoted to the service of others.”

He was an agriculturalist of the first order!