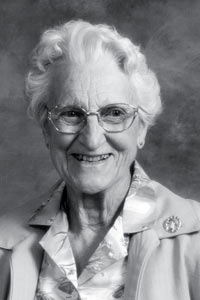 Mabel (Bell) Britton (nee McCalpin) was raised and educated in Killarney. In 1928, she received her teacher training in Winnipeg, after which she taught for three years. In 1936, she earned a BSc in Home Economics from the University of Manitoba.

Following graduation, Mabel was employed by the government to conduct Federal-Provincial Youth Training Schools, the first of their kind in Canada. Mabel taught basic cooking, sewing and homemaking skills to young women. She was appointed Food Specialist with Manitoba Extension Service and pioneered the development and delivery of adult leadership programs to improve the quality of farm family life. These life skills and farm record keeping programs became the base for Home Economics extension in Manitoba.

In 1940, Mabel married Clarence Bell, following which they farmed for 35 years in the Jaques district, near Killarney. In addition to her work on the farm, Mabel continued a lifelong career as an educator and community development volunteer. Mabel was widowed in 1981.

As well as being a founding member (1956) and charter president of the Jaques Women’s Institute, Mabel served six years as a government-appointed member of the Provincial Advisory Board. An ardent supporter of the Canadian Red Cross, she formed the Jaques Community Red Cross and served as secretary and work convener. Mabel served as vice-president of the Manitoba Division of the Red Cross and as charter president of Region One, the first region established outside of Winnipeg. In 1962, she helped organize the first Junior Red Cross rally held in a rural area. In 1963, Mabel received the Red Cross International Centenary Award, and in 1971 a provincial long-service certificate for 40 years of outstanding voluntary service.

Mabel served as charter president of “The Colleens” Toastmistress Club, was charter secretary of Council 8 Toastmistress International, and was later instrumental in reorganizing the local Blarney Toastmasters Club. She was in demand as a judge at 4-H public speaking competitions.

Mabel volunteered at the local cancer unit, the Killarney Hospital aid group, local senior citizens groups, and for several years compiled a history column from archives for the local newspaper. In 1982, Mabel married Vern Britton. She continued her volunteer activities in Arizona where she and Vern retreated each winter. Mabel was again widowed in 1996.

Mabel Britton was a dedicated humanitarian, a gifted leader and friend to all. She contributed greatly to the fabric of community life in rural Manitoba.