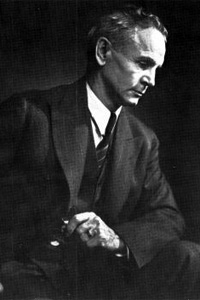 Born at Ellesville, Ontario and reared on a farm, Hon. John Bracken was a graduate of the Ontario Agricultural College. Moving west as a young man, he became professor of field husbandry at the University of Saskatchewan from 1910 to 1920. During his teaching career, Bracken wrote two books: Crop Production in Western Canada and Dry Farming in Western Canada. These were major contributions at the time, as no other compilation of existing data had been made in Western Canada.

In 1920, he was named president of the Manitoba Agricultural College. Soon after becoming president, Bracken was appointed to chair an Agricultural Extension Council, organized to maintain close co-operation in agricultural extension activities. A related activity which Bracken organized was a massive survey of farm conditions in Manitoba, which had a profound impact on subsequent agricultural policy and activity. This report formed a basis for the subsequent commission inquiry into “Unused Lands of Manitoba: 1926.”

Premier of Manitoba for 20 years, his entry into a political career was entirely unpremeditated. However, his long and distinguished service was devoted to giving his province efficient government. Bracken was a strong supporter of the Wheat Pools and other co-operatives. He was greatly concerned about the farm problems of the 1930s and took the practical step of wiping out the relief debts owed to the province by 13 municipalities hardest hit by drought. He set up the Manitoba Wartime Agricultural Committee to deal with wartime problems of production and the adjustments anticipated as necessary after the war.

Noted for his honesty and sincerity and recognized as a tough, wily and strong leader, Bracken addressed himself to the problem of agriculture and rural living throughout his lifetime. Following his retirement from politics in 1948, he directed his energies to his first love, farming.