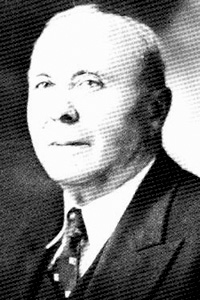 Percy Beachell was born February 2, 1874 in Yorkshire, England, one of 15 children. The family immigrated to Canada in 1889, coming to Portage la Prairie, then on to Rosser where Percy was to live the rest of his life. He married Stella Briggs in 1918, raising daughter Joy and son Alan, who still lives on the home farm. His love for hunting kept his family well supplied with meat in those early days.

Mr. Beachell was elected to the RM of Rosser in 1914 and held office until 1921. He was elected Reeve in 1922 and remained in office until 1953. Percy was also a member of the Good Roads Association for 40 years, 20 of these as President. It was during these years that Percy strove to bring hydro electrification to the area. He worked constantly to improve living conditions in the municipalities.

Percy was the first postmaster in Rosser; served as an agent for International Harvester machinery (McCormick Deering) for 50 years; agent for North Star Oil Products; sold hail Insurance. He was Chairman of the Victory Loan Commission during WWII; Warden of the Anglican Church of Rosser from 1902-26; Life Member of the Liberal Party; Justice of the Peace for 25 years; member of the Motor League for 20 years; member of the Canadian Club for 30 years; Honorary Citizen of the City of St. Boniface; member of Old Age Pension Relief Board for 20 years; member of Manitoba Cancer Relief & Research board 25 years (20 as chairman) and was instrumental in getting free treatment for rural patients.

Mr. Beachell was a wealthy man, perhaps not so much in the monetary sense, but in possessing an upright character and multitude of friends – qualities that money cannot buy. The service he rendered for the betterment of the lot of man was well known throughout the province.