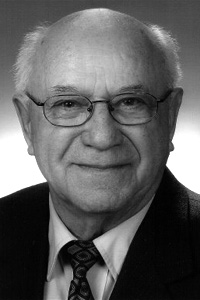 In 1952 Massey Ferguson of Switzerland encouraged Swiss born Charles Balmer to visit Winnipeg for training. He stayed and went on to influence the agriculture industry in many positive ways as an inventor, innovator, designer and entrepreneur.

From 1953 to 1977 he worked as an ag-mechanic for Elie Motors, a J.I. Case dealer. Here his talent and passion for equipment blossomed. Following his identification and rectification of the engineering faults on a customer’s combine in 1955, the J.I. Case Company hired him to develop similar retrofit kits for 200 combines in Canada.

By 1961 he had acquired his pilot’s license and became one of Manitoba’s pioneer aerial applicators. He established Elie Airspray, a custom ground and aerial application company serving Elie area farmers for 20 years.

In 1975 Versatile Manufacturing hired Charles to manage its assembly and repair facility in Algeria, where he trained people in service and repair of Versatile equipment.

Upon his return to Manitoba, Monsanto asked Charles to develop a metering system for aerial application of granular Avadex. He found this unfeasible and instead designed a metering system attachment for high flotation ground applicators.

He founded Valmar Manufacturing in 1977 to build the new Avadex machines. It was here he became absorbed in equipment design including:

Charles’ influences on agricultural practices and equipment design nationally and internationally include:

Charles continues to search areas for innovation: automotive, for improved suspension and steering; trucking, for tank design; aircraft, for strength and light weight; and heavy construction, for durability.

Charles received the Canadian Association of Agri-Retailers Honorary Member Award for contributions to the crop input industry. He has been featured in many farm publications.

At age 73, he continues developing new products. Charles Balmer’s life work has been to design simple and practical equipment. He has been referred to as “an application-equipment genius”.