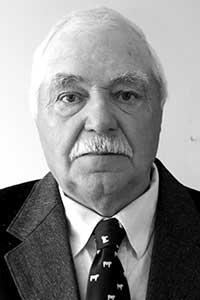 Harry Airey was born and raised on a farm in the RM of Daly. He attended Rivers High School, and following that, he began farming with his father. In 1965 he took over the home farm and began his own mixed farming operation. Two years later, Harry married Joan Bennett. Harry and Joan have three children, Raymond (Barb), Lori (Darcy) Heapy, and Shawn (Tanya) and several grandchildren.

In 1972 the Aireys bought their first Charolais cattle and their farm became known as HTA Charolais. They continue to raise cattle as well as farm over 3,000 acres of pasture, hay and grain land. HTA Charolais has shown and sold cattle across Canada and the United States. Their heifers have also been sold and shipped to Russia. Charolais embryos exported to purebred breeders in Sweden produced a bull that was the only one allowed in Sweden’s herd book because of his quality.

Record of performance (ROP) of his animals has been of upmost importance to Harry. At the Douglas Bull Test Station, he served as a director, vice-president and president. He also worked on the ROP Board and the Charolais Herd Analysis and Records Management program.

In 2002 Harry was named to the Canadian Charolais Association Honour Roll. In 1988 he was awarded the Pure Bred Beef Producer Award from the Manitoba Department of Agriculture and in 1989 and 1998 he was nominated for the Seedstock Producer Honour Roll of Excellence by the Beef Improvement Federation based in South Dakota.

In his community, Harry was a promoter of cattle production in general and the Charolais breed in particular. As a leader for 18 years in the Rivers 4-H Club, he was always active and interested in the Beef Project. When his children were younger, Harry took time to coach minor sports – baseball, hockey and ringette. An avid curler, he served on the Rivers Rink Board for several years.

In 2009 Harry became a director of the Rivers and Area Community Foundation. His quiet demeanor, combined with his “let’s get it done attitude”, never fails to keep all of the directors on point and completing the task at hand.