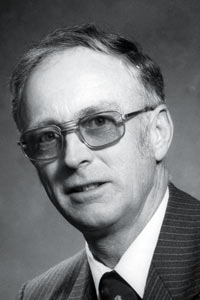 Alex Stow, the eldest son of T. J. and Bessie Stow, was born June 2, 1928, in Graysville, Manitoba. After completing Grade 11 at Graysville Consolidated School, Alex took over the family farm. In 1951, he married Pamela Laroque. Together they raised five children: Christine, Mary, Lisa, Janet and Paul.

Alex became a pedigreed seed producer specializing in seed oats and Selkirk wheat. He was also actively involved in developing domestic and international markets for both crops. As a Select Seed Grower, Alex was a member of both the Manitoba Seed Growers Association (MSGA) and the Canadian Seed Growers’ Association (CSGA), on which he served as president for two years. In recognition of his contributions, Alex was elected a Robertson Associate, the highest award the CSGA can bestow on a member. Alex introduced pulse crops such as peas, lentils and edible beans to his farm operation and later grain corn, sugar beets and potatoes—crops which are now commonplace in his district. He was the first to apply for and receive water rights for irrigation—a key risk management practice on the highly erosive and drought prone Almassippi Soils in the Graysville area. On his farm, Alex established field shelterbelts, sponsored fertilizer trials and introduced new and innovative machinery and cultural practices. His leadership helped transform the surrounding community into a highly diversified and productive farming area.

Production diversification led to the establishment of Stow Seed Processors and the building of ultra-modern grain handling and seed cleaning plants at Graysville, Elgin and Cardale. New markets were found: flax and Glenlea wheat for frozen bread and pizza dough in the U.S.; yellow peas in South America; cleaned and ground flax in Germany, Netherlands and Denmark; canola in Japan; and lentils in Turkey and the Middle East.

Alex and Pam were also involved in 4-H and the Dufferin Agricultural Society. Alex served as a trustee on the local school board, a steward and elder of the local St. Paul’s United Church and a member of the Carman Kinsman Club. The Stows were generous financial contributors to community projects such as the University of Manitoba Carman Campus; Carman Area Foundation; Carman Medical Clinic; Carman Golf Course; and the Boyne Regional Library. In 1997 Alex and Pam won the Manitoba Good Roads Association Shield for Best Home Grounds, Country Residence, as well as the Western Culvert and Metal Shield.

The Stows’ contribution to agriculture is significant—locally, provincially and nationally.

Alex’s philosophy of life is “to work hard, have fun and be honest with yourself and others. Be considerate and refuse to be mean.”