Nominated by: The Southwest B Region Women’s Institute 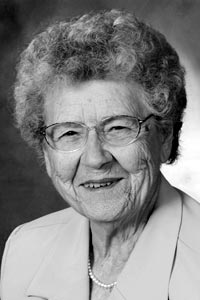 Eileen Brake (nee Bryant) was born in Stanley Municipality April 8, 1919. She received her formal education at Morden, Manitoba, and teacher training at Brandon Normal School. She taught at Lake Max, south of Boissevain, before her marriage to Wilfrid Brake on November 4, 1944. They had a daughter, Betty (Philp) and a son, Bob, then six grandchildren and six great grandchildren.

Eileen worked alongside Wilfrid during their farming years, keeping farm records, tending the yard, driving the truck and tractor when needed and assisting him in his many community activities. The Brakes won four local home grounds competitions.

Community involvement began early in life in school, church, C.G.I.T. and 4-H. The springboard for many later associations was her membership in Manitoba Women’s Institute. A member since 1955, she has served as president of her local, of Southwest Region, of the province and as a vice-president of the National Board. She has been a delegate to several national conventions and those of Associated Country Women of the World in Canada, Kenya, United States and Ireland. Association with many groups enabled Eileen to gain valuable experience which she used for the betterment of her community. While sharing knowledge gained, she encouraged and assisted others to become involved.

Because of her involvement in her community, Eileen has received several awards. These include the Governor General’s Medal in grade XI, a Life Membership in Women’s Institute and Queen Elizabeth II Jubilee Medal. In 1984, Eileen and Wilfrid were invited to Winnipeg to attend a dinner in honour of the Queen’s visit.

Eileen has been described as resourceful, dependable, enthusiastic, a good friend and neighbour. She is a volunteer who helps make her community a happier, healthier, more interesting place to live. Her contribution to “home and country”, which continues, is significant. Her lifelong motto has been, “If a job is worth doing, it is worth doing well.”