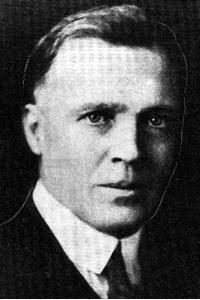 W.J. Black was born at Mansfield, Dufferin County, Ontario in 1872. He attended the Ontario Agricultural College and graduated with his B.S.A. in 1901. Following graduation, he moved west to Winnipeg and took over as the editor-in-chief of the Farmer’s Advocate from 1902-03.

In 1913, he was instrumental in establishing the Canadian Boys and Girls Clubs in conjunction with Edgar Ward Jones. He was appointed Manitoba’s deputy minister of agriculture in 1905 and in the same year he was appointed the first president of the Manitoba Agricultural College and professor of animal husbandry, a position he held for 10 years. Much of the development of the Manitoba Agricultural College can be attributed to Dr. Black’s sense of duty and dedication to an ideal. The college grew from humble beginnings to a magnificent institution at the close of president Black’s incumbency.

Following his retirement from the Agricultural College in 1915, Dr. Black became the federal commissioner of the Agricultural Instruction Act from 1916-18. He was also chairman of the Soldiers’ Settlement Board of Canada and deputy minister of immigration and colonization in Ottawa. When Canadian National Railways organized a special department of colonization, Dr. Black accepted the position of European manager. This department dealt with the selection of suitable settlers and directed them to land in all parts of Canada. In 1924, he returned to Canada to become director of CN’s colonization and development department. He retired from this post in 1938.

Black was a man with a forceful personality and a strong religious character. He was imaginative and provocative. Agricultural education in Western Canada owes much to Black.