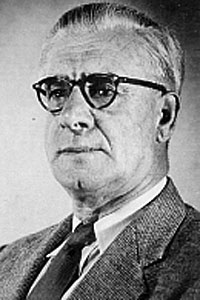 John Nicholas Welsh was born in Ottawa, Ontario, January 13, 1894. After receiving elementary and secondary education in Ottawa, he entered MacDonald College (McGill University), where he gained a BSA degree in 1922. In 1930, he was awarded his Master of Science degree from the University of Alberta.

Mr. Welsh was internationally famous for his research in cereals. He produced, during his scientific career, seven major varieties of oats: Vanguard, Ajax, Exeter, Garry, New Garry, Rodney, and Micar. By 1958, approximately five million acres of prairie land were covered with his varieties. His productions were also widely grown in Eastern Canada and the United States.

For his many achievements Mr. Welsh was made a Fellow of the Agricultural Institute of Canada and an Honorary Life Member of the Canadian Seed Growers’ Association. In 1956, he was given a citation at Cornell University in recognition and appreciation for contributions to the improvement of agriculture in New York State.

In January, 1960, Mr. Welsh retired from the Research Station, Canada Department of Agriculture, Winnipeg, and immediately undertook a research project on the improvement of crops at the Plant Science Department, University of Manitoba, where he continued to work until his illness.
His inquiring, practical mind and his mastery of intelligent observation are recognized as hallmarks of an outstanding scientist. Unquestionably, his contribution to Canada, as well as other countries, has been truly significant.