Nominated by: RM of Wallace 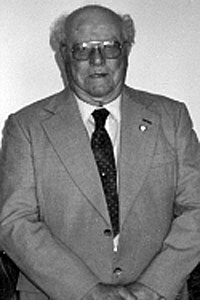 Cowley Webster was the first child of Lydia (Henry) and Cowley Matthew Webster, pioneers of the Two Creeks District. During his lifetime the changes and innovations on a mixed farm were remarkable, e.g. horses to tractors, trails to roads, and buffalo coats to nylon shells. World War I interrupted his studies at Ross School, and he didn’t return to the classroom until 1924. However, by 1927 he had graduated from the Diploma Course in the Manitoba Agricultural College, with an overall average of 79%.

On June 28, 1928, he and Katherine Victoria (Strang) were married. They raised two children, Mrs. Lois Tanner and Mr. Cowley Kent Webster. Mr. Webster’s career and interests took him far beyond the limits of his farm. He bought his first Aberdeen Angus calf in 1933, and by 1935 he had established a herd of pure bred Angus cattle. Because of his ability to recognize and raise prize animals, he won many awards at fairs, including the Toronto Royal. His showmanship is evident, for he won four cattle classes in 1951 at the Brandon Summer Fair. Because of his expertise he was frequently the judge for many cattle shows. He judged at the Regina Bull Sale in 1947, and later at cattle shows in Calgary, Edmonton, Saskatoon, Brandon, the Red River Exhibition and many fairs in Manitoba.

His untiring efforts to serve his community are evident. He served as a councillor and as a Deputy Reeve of the Municipality of Wallace. Many Boards re: Sherwood Lodge, Virden Hospital, 83 Highways Association, Virden Agricultural Board, and the Great Western Race Board, have been the beneficiaries of his unstinting efforts to help his friends and neighbours. His interests are many and varied, and thus his contributions are numerous and valued.