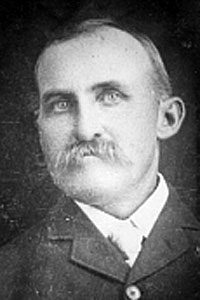 Robert Klock Smith was born in Carp, Ontario 1859. When his father died, he, at age thirteen, moved to Aylmer, Quebec to work in his uncle’s lumber mill. He was bookkeeper and telegrapher, becoming fluent in the French language.

In 1882, he came to Winnipeg, on to Brandon, then to the Maskawata district, filing on a CPR quarter. He worked in the woods at Rainy River and Portage la Prairie to finance the building of a house. In 1889, he married Margaret Smith from the Ryerson district. They raised a family of five boys and two girls. In politics, RK was a Liberal. In 1903, he was one of thirteen farmers in the West selected by Immigration Minister, Clifford Sifton, to travel to Britain to encourage immigration. He returned to his farm where he lived out his life.

Mr. Smith had one of the first horsepower driven threshing outfits, later acquiring two steam machines and went about the area from Souris to Harding, harvesting crops. He had the first gas engine in the district, also used for threshing. R.K. Smith was instrumental in forming the Oak Lake Agricultural Society and served as secretary for many years; was chairman of the local School Board; assisted in building Ryerson Methodist (United) Church. His well-kept diaries on weather, politics, and farm life run from the mid 1880’s to 1931.

Mr. Smith was known for his fairness in business dealings, a leader in the community. He was indeed, influential in the bettering of community life in the rural area.